They say you can’t measure an intangible like courage, only see it in action. Well Khrabrost’ (translated from Russian as ‘mettle or ‘courage’) is how ZONA ALFA measures a Zone Crew’s potential effectiveness in battle. A Zone Crew’s khrabrost’ is linked to the total available Actions among its members. It’s the main value used to build a squad.

There are three types potential crew members in ZONA ALFA, experience levels if you will: Green, Hardened, and Veteran. When activated, each can perform a certain number of Actions according to their level: 1, 2, and 3 respectively.

That in mind, Other Pat and I ran a quick game Sat. afternoon. Two crews in a Threat Level 1 Area. (2 Hot Spots) We each built a squad of 7 K. (Seven Actions/Activation between all squad members)

The larger 6 x 4 mission area allowed us to start some distance from each other and focus on the particular Hot Spot nearest to our deployment. With a 6 turn limit, we each pretty much decided to live and let live, and go for the salvage. Although we traded shots near the end, (a mistake which cost Other Pat one of his new recruits) both of us cleared out the Zone Hostiles and snagged some loot before it was time to evacuate the area. Other Pat got a good roll on the Salvage Table, finding not only valuable stuff but an Anomaly –  which yielded an Artifact worth a considerable amount of Zone Script. (It’s a shame he’s going to have to spend a chunk of it to fill the newly vacant spot on his crew roster)

Very straightforward game with plenty of room to avoid your opponent and maneuver behind cover – which we did. Both of us used Bolt Toss to trigger the Hot Spot and spawn the Zone Hostiles. (Dogs at the first, Zombies at the second) The tone of the game would have been much different in a smaller area, say 4′ x 4′ or even 3′ x 3′, far more aggressive and dangerous. (I think a 4′ x 3′ is optimal; 48″ is wide enough to vary deployment spots and allow for flanking, and 36″ is not so deep as you need to use the first turn just getting stuck in.) All in all, it was a good game and there being only two of us, we could stop and discuss options/finer points without worrying about dragging things out for the others.

One we finish up our current Symbaroum adventure, we’ll all be making Zone Crews for a lengthy session of ZONA ALFA play tests. I’m very curious to see how a mini-campaign plays with six players. We’ll probably split into two teams of 3 each, with one fig from each of the team’s squads able to activate each turn. You’ll find out with us how well that works.

Speaking of reinforcements tho… Here’s some new Lead Adventure and SASM figs. I’m a fan of Igor Karpov’s sculpting and wanted to keep the same aesthetic. Below are some pictures. As you can see, the SASM miniatures have the same look but are not as chunky as the original Lead Adventure Last Project line. Still, I think they serve the purpose quite well.

And just because I had the camera… 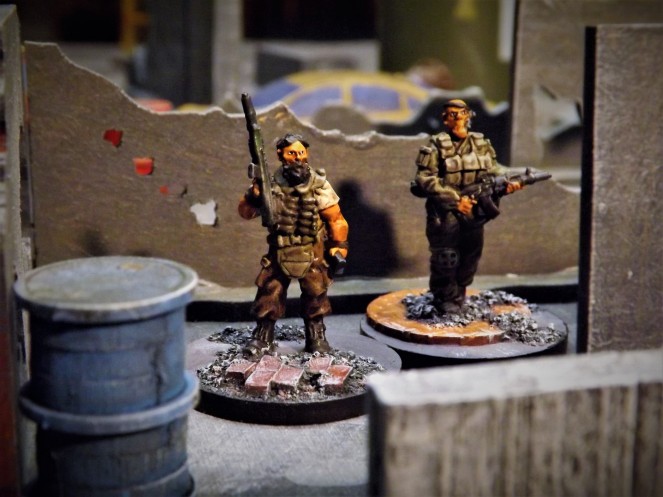 That’s it for now. Thanks and have an excellent weekend.