The Adventure Continues in Davokar

More Symbaroum last night as the party made its way deeper into the forest, heading toward a Lone Gate. These ancient structures are portals that lead to the Gloaming Roads; the mystical pathways that allow one to travel swiftly across the trackless leagues of  Deep Davokar. 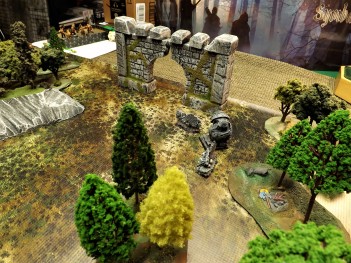 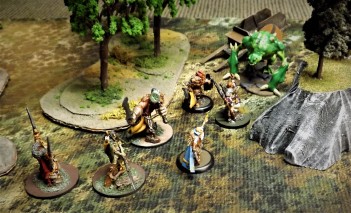 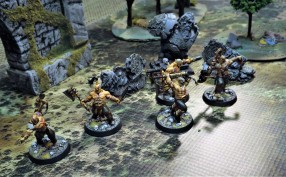 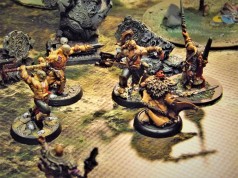 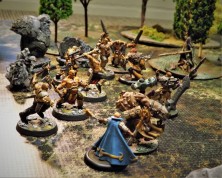 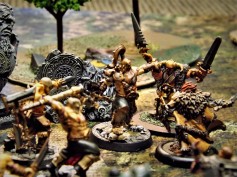 Three incidents worth noting: the first was the appearance of a wizened trapper. Hunched, wrinkled and worn, with intricate blue tattoos in precisely half his body, he was accompanied by a blind and mute boy who carried his bags. While one member pondered attacking the seemingly defenseless duo (bad idea) common sense and common courtesy prevailed. The party left the scene with less gold but a number of useful provisions.

Next was a campsite. The bodies of five novice treasure hunters were discovered, all with terrible wounds and signs of corruption.  Unfortunately, the ogre tripped while searching one of the tents, knocked over a cooking set and smashed one of the camp stools. The racket alerted a blighted toad, demon… thing. Some minor wounds but the ogre redeemed himself and killed the vile creature.

Last was the Gate itself. Barbarian raiders had been tracking the party, having recognized one of the characters as a wanted fugitive. Their ambush wasn’t as successful as they’d hoped, but the ensuing brawl was quite ugly. Here again, Max’s ogre was in fine form, absolutely destroying barbarians with his hammer and sword. (twin attacks, each 1D8, +1D4 damage. It is a beautiful thing when it works.)

The last of the raiders was dispatched just as the sun set and the full moon rose. Ritual performed, the Gate opens and our heroes step onto the Gloaming Roads.  To be continued next week.