Not a lot of photo ops from our recent DnD sessions, altho we last left our heroes carrying an injured old man with dementia to safety while his family farm burned  in the distance. (the goblin bard swears he had NOTHING to do with that. He only set the pig pen ablaze.)

That was after the invisible, tentacled were-cow thing in the attic and the zombie-mom in the bedroom, so yeah… We’re going to bring him to the town for safety before we head back up and sift the smoldering ruins of his once-prosperous homestead for the entrance to an underground lair wherein we’ll most likely find the cause of the mysterious goings-on.

In the meantime, Other-Pat blew us off last night – some lame excuse about ‘celebrating his anniversary’ – so the Dusk Wardens sallied forth to recover treasure from an old border tower. 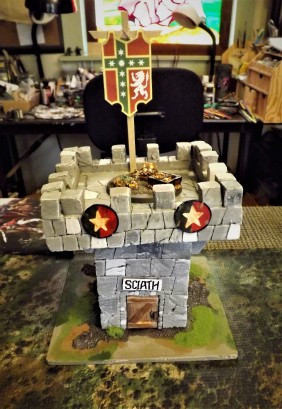 Opposing them stood the twisted conjurer Sothek Fael, a pair of gibbering familiars, a Plague Knight, and a Dark Elf Assassin. Fael had also employed dark majiks to turn the nearby waystones into necromantic portals that spawned 4 ghouls each. 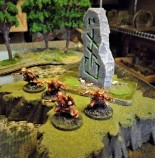 The battle was straightforward with no real surprises. (everyone had had a long day at work) Still employing Multi Hit Points for Named Characters, the Dusk Wardens soaked up some serious damage to prevail against the fell hand of the evil mage and his minions. I think HP should max at three, otherwise the players wade in with no real regard for damage. Three allows them to be brave and game cinematic-style but makes damage a serious threat, and health potions and healing much more important. 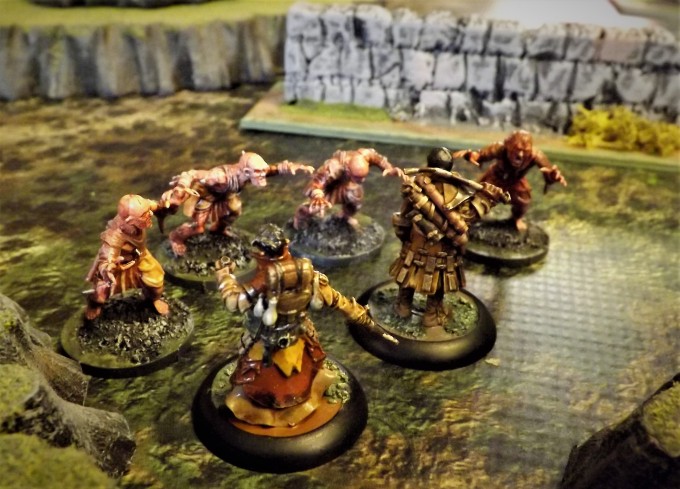 The night ended with the Dusk Hunter at the doors of the tower, the Dusk Quarreler trotting right behind him while the rest of the Dusk Watch bandaged up their wounds.

All in all, it was a solid if undramatic game.

In other hobby news, we’ll be moving into some Savage Worlds Cyberpunk once this current DnD adventure ends. Derek is working his way through the Pathfinder edition of Interface Zero 2.0 as well. And then there’s Gloomhaven 2nd Ed. According to the Kickstarter updates, the box is on the way/getting prepped for shipment.  So it looks like we’ll be brightening our dreary winter nights with plenty of RPG games.

Oh and here’s an new Reaper Wizard. Sorry I didn’t catch the subtlety in the shades of gray on him. A simple PJ but I’m pleased with him. He’s pictured here with another recent addition.

(BTW: the Reaper figs listed below are still available. $125 takes the lot. USPS Priority Shipping included in the ConUS. Let me know if you or anyone you know is interested. These need a good home.)

Thanks much. Have a great day.

4 thoughts on “Dusk Wardens and a new Wizard”