The Duke of Lorica has requested that you and your companions investigate a simple family matter.

His niece, Aolynn, summers at the farmstead of a retired member of the Royal Guard near the frontier town of Dunnhaven. The dispatch rider bearing the weekly correspondence from her is two days overdue and the Duke is concerned. He has ordered a troop of Border Guards to the area but your party is nearby and he wants assurances sooner rather than later.

The Duke is offering a respectable sum of Gold Crowns, but only after the party secures evidence of the niece’s safety. To sweeten the deal, he has sent additional supplies with the messenger bearing this offer.

Time constraints require we continue with a familiar rule set for our weekly sessions, so Matt, John, and Derek elected to continue with ASOBH. They are beginning this campaign with a single character each. Matt elected to play as the Journeyman Mage, Iobus Graymorn. John went with Barbarian Mercenary Brekr of Icehelm, while Derek decided to play the Skald, Alrick Tenloch.

The Party arrived at the farm early in the morning to find it seemingly deserted. There are no signs of life, human or livestock. The area is eerily silent and a strange fog is lingering over the place that seems unaffected by the rising Sun.

GAME EFFECT: ALL LOS is Limited to LONG. You detect Noise/Movement but Identity of enemies is not revealed until models are within LONG range.

Each PLOT POINT location contains a Risk and a Reward, i.e. an enemy that is triggered when a model elects to check the area, and an item reward and critical game information once that enemy is defeated.

Of course they ignored the first Plot Point location (The Barn) just outside their deployment area and headed straight to the Outbuilding instead. Brekr triggered a swarm of Giant Locusts and he and the Mage were forced to fight them off while the Skald took his sweet time getting down the road. (New boots?)

Eventually they killed the last  locust, searched the area for salvage and information, then headed straight to the Main House.

The Mage, still queasy about the bugs, peeled off to the Field Plot Point, shouting words of encouragement to the Barbarian and the Skald. He was confident the two of them would make quick work of any threat that appeared.

Meanwhile, the third Ghoul hopped the hedge and sprinted toward Graymorn, who was mixing it up with a Giant Spider. 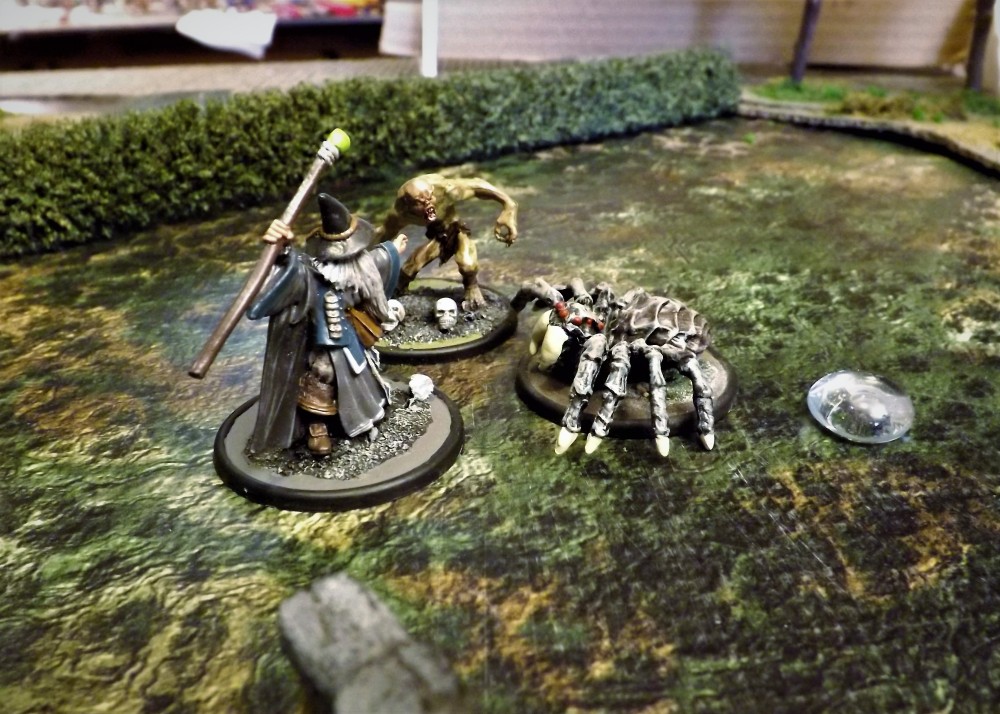 Combat was short and fierce, but our Heroes prevailed. All the Plot points were Searched, the meager loot gathered, and the crucial information discovered.

“They have taken her. Warn the Duke the Black Hand has returned.”

Duke’s niece kidnapped, her guardian and his family brutally slain, all carried out by a mysterious enemy called the ‘Black Hand’. Who is this shadowy foe from the Duke’s past come to haunt him anew? Tragic as it is, could it be that more than the life of one young girl is at stake?

Tune in next week.

4 thoughts on “The Summoning – Chapter One”