Finally got to run through a trial game of Rogue Stars last night. One character each to get the basic mechanics down. Cyber-Ninja and Tank against a Bounty Hunter and Pirate (he prefers the term ‘Privateer’)

Rolls for Mission, Objective, Environment, Complications will come after we have Activation/Reaction, Movement and Combat down. Besides, some of us haven’t worked up a full crew yet.

Our Cyber-Ninja and Tank were the attackers while the Pirate and Bounty Hunter found their mutual interests momentarily aligned enough to team together to thwart them. 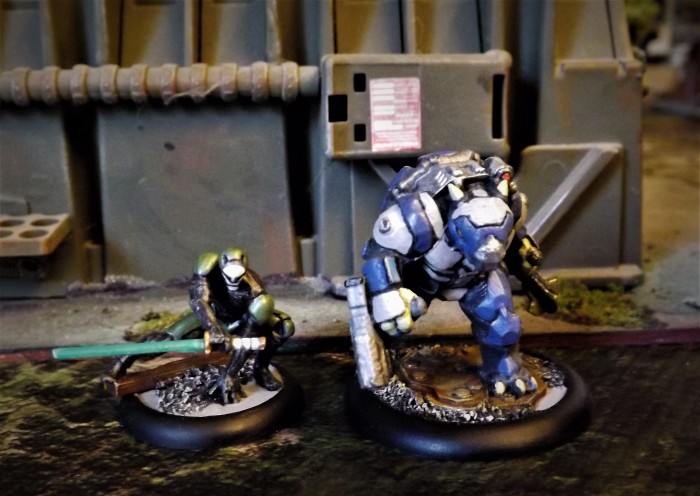 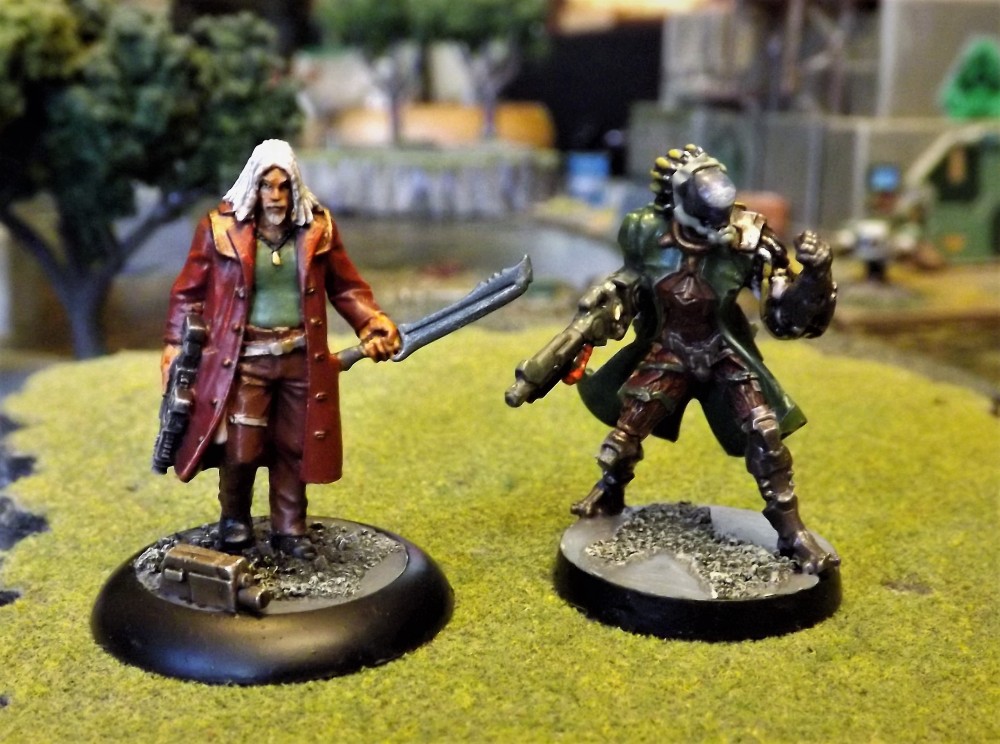 Turn One saw both sides spend Actions/Reactions advancing and jockeying for position. Derek’s Tank Quantum Harnessed its big self a mere three inches from the objective right away. John’s Alien Bounty hunter rushed forward hoping to bring his Laser Rifle to bear.

Cyber-Ninja aka “Sneaky Death-Borg” sidled up the left by the bunker and through the trees while our dashing Privateer sauntered forward, ostensibly in support of his (temporary) ally.

The next turn saw Derek’s Tank move forward and blaze away with his Plasma Cannon, inflicting a world of pain on the Bounty Hunter. First volley sizzled through the torso armor, knocked him flat with two Pins and a Serious Wound. Threat dispatched, he then grabbed the objective.

The Pirate, shocked by the violent display, rushed forward and unloaded his SMG on the Tank. Two rounds of Automatic FIre (four shots) and the Tank crumbled. Huzzah Team Pirate!

Thinking the tables are turning, the Bounty Hunter successfully activates, removes two pins, staggers to his feet, only to be charged by the SDB and decapitated in a devastating flurry of Monowire Sword blows. Oops. The cyber-ninja wiped his blade clean and ran off behind a hill before the Pirate could turn around with his trusty SMG.

The Pirate – who couldn’t help but notice the keenness of the Cyber-Ninja’s blade and his prowess –  decided the wiser course of action was to camp out at the old Warp Gate and force the SDB to cross the open ground to him. (rather than chase after him) So… we called  it and sat back to discuss our first encounter with Rogue Stars.

Again, this was a one-of game to learn the core Movement and Combat mechanics, so our impression is limited. The Mission Tables, Environments, Settings, Complications, and Campaign Rules all look great, but we’ll cross those bridges when we come to them. Rogue Stars might be a bit crunchy for some, but I’m confident once we familiarize ourselves with the basics, we’ll move onto a full-blown campaign. At this point, we’re all very much looking forward to that.

Below are a couple pictures of more recent brushwork. They may or may not get some Rogue Star action.