On the western fringe of the Exclusion Zone lies the deserted military garrison, Sosnovy Bor  – Pine Forest. Classified as Threat Level One/Relatively Stable, it is a great training ground for experienced Stalkers to acclimatize new crew members to the hazards of the Zone, as well as a frequent destination for Zone guides to bring their ‘tourists’ in order to give them a taste of danger without too much trouble.

Well scavenged, there is little by way of salvage and equipment, but its proximity to roads and trails make it favorite jumping off point for excursions deeper into the Zone.

Slipping under the Cordon fence, the four of them made their way briskly along a well-worn path to the old garrison. Detecting movement, they did a quick radio check then split up and approached the base each from a different corner.

The leader Timur Bok, scanned the grounds with his monocular. “Two bodies,” he said. “With packs and weapons still on the ground beside them. No local distortions that I can detect though. Appears the emission didn’t generate any anomalies. That means no artifacts.”

“It’s money laying on the ground,” Vitya protested. “If you’re scared, don’t worry. I have extra med kits in my pack to patch you up. Unless you want to sit this one out, Mr Big Shot. Then we’ll split the money three ways. Right Sava?”

He heard Sava spit. “If there’s anything of value down there, I’ll find it,” the scrounger said. “Besides, I think Olga deserves some extra magazines after she was so good to us on our last outing, no?”

Sava Urakov’s old AK-74 had saved their collective bacon three days past when the four of them had been jumped by a pair of Snorks outside the bus stop on the old south road.

“OK. We go in,” Timur decided. “Eyes up though. I got two Rotters shuffling by that office building and movement behind the garage.”

Ilya sighed and chambered a round in his rifle. “You know, if you see one…”

Vitya jumped to his feet. “…there’s a dozen more you can’t see,” he finished. “Whoo hoo. We’re off to see the wizard.” 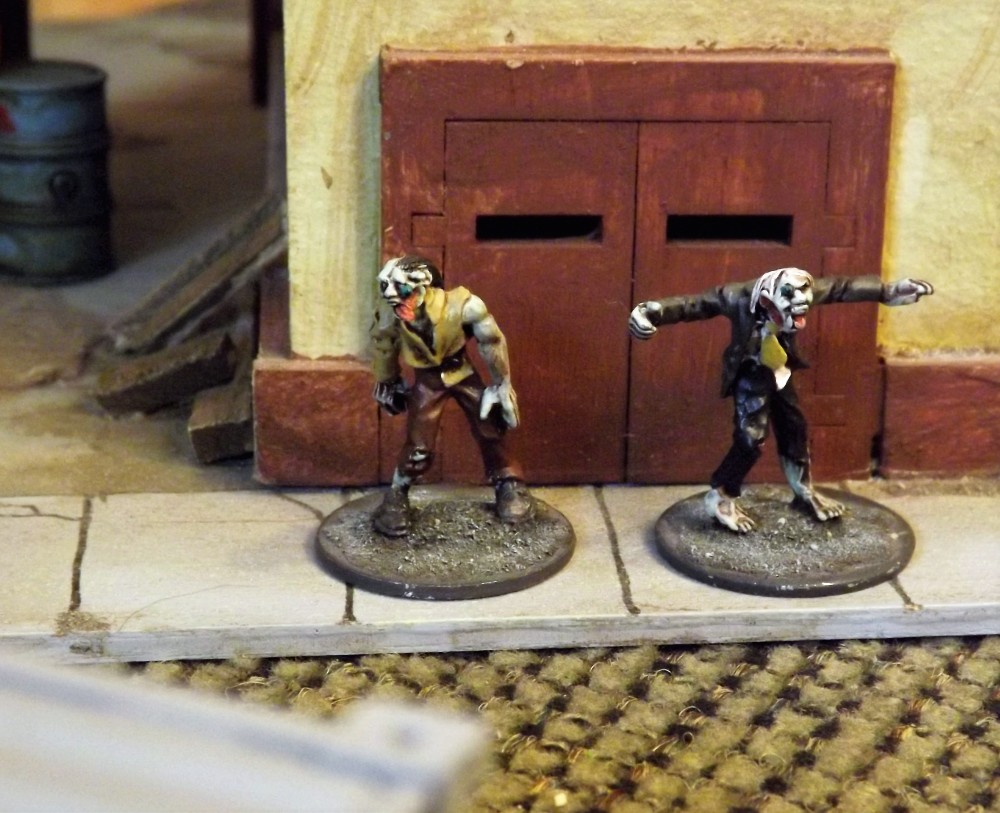 Very straightforward game to test the combat mechanics and the Hostile NPC AI rules. Area had Two Hot Spots (locations with probable loot. And hostiles) and five enemies already visible. The players decided to cooperate rather than compete, coming in from the four corners of the base/mission area.

Timur the leader promptly climbed to the top of a large fuel tank. Vitya the medic skirted the far side of the garage to flank the zombies and approach one of the Hot Spots.   (symbolized by a Dead Stalker scenic) The Scrounger Sava ducked and weaved his way past the ConEx containers toward a truck, while Ilya lugged his battle rifle around the fuel depot at the rear of the base. 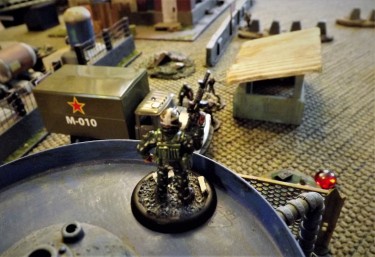 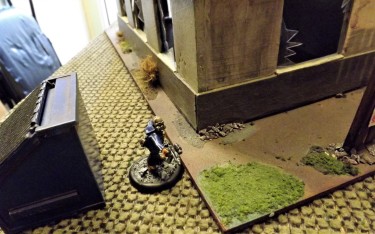 The game itself unfolded swiftly and without surprises: seeing Timur on the fuel tank, the zombies promptly lurched forward, allowing Vitya and Ilya to approach unnoticed. Sava made the first kills of the game, dropping the two office zombies before they knew he was around.

Jealous, Timur lobbed a grenade at the shuffling trio, only to miss and tear up the cab of a nearby Ural 4320. The zombies pressed ahead, coming within 4″ of the second Hot Spot and triggering a pack of feral dogs, who ran to the fuel tanks rear ladder and began barking.

With this distraction as cover, Vitya tossed a bolt to trigger the Hot Spot directly in front of him. (Two Bandits!) Meanwhile, Sava gave Olga a quick kiss on the bolt cover and sidled over to the barricades and began picking off the distant zombies. Ilya ran to help Timur, who was prepping another grenade.

Timur dropped the grenade on the dogs. (“Puppy burgers over the camp fire tonight, comrades!”) Sava took down the last of the zombies which allowed Ilya to climb on top of the damaged Ural and dispatch the two Bandits before they could turn on Vitya. 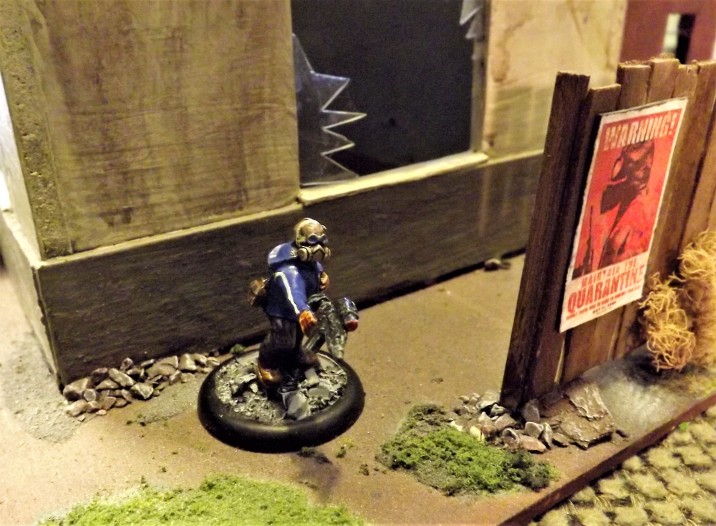 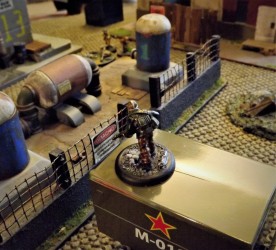 All threats dispatched, the Hot Spots were clear for salvage. Sava, being a Scrounger, can check each location twice, virtually guaranteeing the STALKERs a decent haul for their effort. Game over.

Only Two Hot Spots, a few Shufflers, some Dogs, and a pair of Bandits, players cooperating and coordinating their moves, the game went smoothly with no drama at all.

Nail-biting it wasn’t but as a test game for the rules? I’d say it Passed. I’ll be tweaking the ZP rules to get the conclusions on paper this weekend and that’ll be another step toward the finish line.

Thanks for reading.  Have a great day.