Safety is just around the corner. A short stroll here to there. Easy, right? 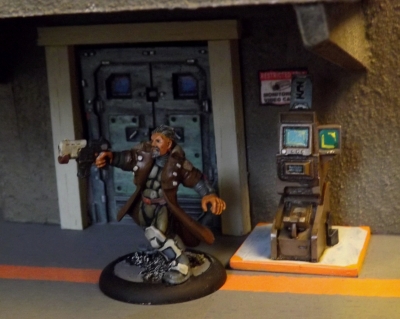 Mira sidled up to the corner of the Conex container, Steyr hugged to her heaving chest. On a better day, it’d be a look worth lingering over. Today wasn’t one of those days.

She wiped blood and sweat from her forehead. “How’d they suss our route?”

She shook her head. “Chummer with the purple vest and Dali-stache who jumped over the hood.” Mira peeked around the container’s metal edge and swept the street through her rifle scope.  “He won’t be jumping over anything for a while now,” she added quietly.

The image of Mira shouting, going full-auto flashes in your mind, the campy thug going back over the hood in several pieces. “Not likely,” you agree.

There was an awful lot of that going on not ten minutes ago: full auto, shouting, people rapidly disassembling. Your ears are still ringing from the gunfire, your heart hammering, courtesy of wind-sprints away from flaming limos.

Under the adrenaline and piss-yourself panic, the snarling joy of still being alive, something gnaws at you; the ambush was perfectly timed, perfectly located, but the attackers were sloppy. Second-rate street species. Pro set-up with a thug execution. You can’t wrap your head around–

Mira finished checking the avenue stretching ahead of you. “We’re clear for now. Where are we, by the way?”

You take a breath and get your bearings. Six maybe seven blocks west of the Abnett Arterial, signs in Hanji and English, a scattering of fuel tanks, the rancid cooking-oil stink of bio-diesel… “Shinzen Industrial District. I think.”

You point down the narrow road, “Mitsu-Sony has a corporate arcology three blocks that way. We get Mr. Rupert Van Dorn and his minders to that corporate-consecrated soil, we’re absolved.”

Mira nods, a frown smudged across her pretty face. “How’d they know our route?” she repeats.

“Does it matter?” you reply.

You look back at Rupert Van Dorn, Assistant Executive Chairman of Special Projects at Lourdes Genetics. He’s rumpled, huffing and puffing, but alive. The two survivors of his personal security team, a girthy, cheap suit with mirror-shades and a ponytail, and a tall, silent guy dressed like a butler, stand beside him. That’s all that’s left of his entourage.

Ponytail is twitchy, jumping at everything. He’s a Sim-Champ; tacti-chrome upgrades to the gills, five-stars in VR simulators, but this is probably his first time in the gutter with real bullets. So long as he doesn’t shoot Van Dorn by accident, you’ll be OK.

The second man, the Butler, hasn’t said a word, not even during the firefight. Guess that nasty little Torrent SMG he carries is loud enough. He’s been sticking to his employer like a shadow, cool as ice.

There’s movement in your peripheral; Sanchez’ coat flapping as he darts along the  building across the street. Viktor is right behind him, shock fists arcing with maximum charge.

We just have to get Van Dorn down the street. Deliver him unscathed, and everybody goes home paid.

Game divided into two acts: the first played out poorly for the wanna-be gangsters. They attacked piecemeal from alleys on the left and right sides of the table. Professional applied violence dispatched them quickly and methodically. No casualties to Matt’s force.

The second act was a sleight-of-hand surprise: Matt had selected Gideon’s three crew members from a pool of four potentials. Turns out the forth had received an offer of employment from Yurchenko Executive Solutions, a rival security crew. As a sign of her good intent, she was the one who gave up Van Dorn’s travel route. Gideon and Van Dorn’s team were enraged by the treachery and Yurchenko’s crew went down in vicious contest.

In the end, Van Dorn, the Butler, Gideon and Viktor limped to safety.

Good game, but there were a number of armor and ranged attack rolls that made me feel the spectral chill of the Traitorous Dice once again.