I’ve been a fan of MERCS Miniatures from the first figure, the Yellow Jacket Heavy Machine gunner. Great dynamic, superb detail, intelligent sci fi, near-future infantry, the MERCS line has only gone from strength to strength in a few years, and currently offers figures for six factions.

The independent faction known as the FCC is one of my favorite. I’ve got a soft-spot for their rag-tag, hard scrabble look and bought them as soon as they were available. Here’s a shot of the original six figs. Notice the head-swap in the back left using a GW scout.

Unfortunately I’m unable to find anyone interested in playing the game, so I’ve employed the figs in various roles as generic militia/scavengers in other games like 5150 and Fast-play House Rules. To buff out this generic force, I took the liberty of giving them a Mobile Gun Platform for Heavy Support, and recently purchased transport in the form of an Antenociti’s Workshop APC. 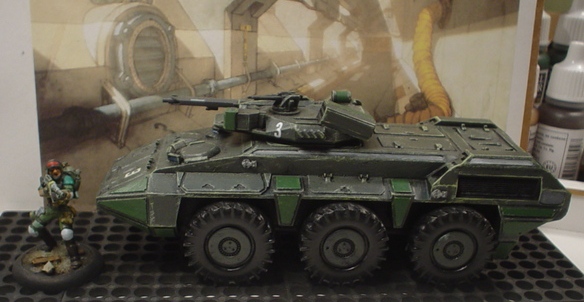 The other day, I figured it was time for a few more line grunts, so I kit-bashed three new riflemen with Defiance Games, MERCS mod kit pieces, some GW, MaxMini resin, Pig Iron and Starship Troopers bitz. Tart up the bases similar to the originals, and voila, I had new recruits.

The challenge was not simply to match the color-scheme, but the dynamic, rugged look of the original figs. They’re not perfect, but they work. Here’s a family shot.

I’ve got MERCS Kem-Var in the queue, along with two AW Warthog ADV jeeps. I’ll be keeping an eye out for suitable drone support.